Day 14 - September 24 - Samos to Delphi
The gas rationing adventure.  Time to depart Samos island  - a final breakfast at the Ino Village and off to explore
a few more beaches before the afternoon flight back to the mainland.  Noticed that the Samos Star boat was still
in Samos Town harbor - Customs strike must have started.
Located a small cove, along with other locals, near the airport - rock beach; however, turns to sand bottom in the
clear, cool, glistening waters.  Nearby Greek Air Force fighter decided to exceed Mach I; thus, everyone came to
attention of the sonic boom.
Nice warm day with lunch from a Gyro cafe - including fries within the Gyro wrap.  Dropped off the car at the
airport - the usual key under the mat and lock the car.  Only a couple of flights departing - our Aegean flight to
Athens and another Olympic flight to Athens.
Clear skies and window seat allowed for views of the islands - large and small - along the flight path.  Amazing to
see the zig zag roads on the steep mountains.  Some islands did not have much civilization due to no real flat or
cultivating fields.   Played the "guess that island" game until the pilot came on the P.A. and gave the answers.
Landed in Athens and started the slow, slow process of picking up the rental car - endless document signing,
initial signing, and review of every rule known to mankind.  Then came the final insight - the Customs strike had
impacted gasoline shipments.  So, very good chance that stations would be out of gasoline.
A new toll road ($2.70) was quick through the city and allowed us to reach the road to Delphi quickly.  Then
came the arduous drive through winding roads and rear bumpers of large trucks.  Dark came quickly as the
scenic gorges appeared.  For the most part, road signs were very helpful - it just seemed that every once and
while, one would be missing from a strategic intersection or fork in the road.
Directional signs were Greek first followed by English translation - generally.  If not, it was game of 'Concentration'
to match the road sign Greek characters with map locations - allowed for in depth driving of small towns.  Asking
for directions could be the same - hear the name; however, cannot locate on map.
Arrived to Delphi - misting mountain rain had started.  Squeezed the Peugeot 206 next to a street planter and
checked into the Sibylla Hotel - nicely painted and extremely nice staff.  All for 34 Euros a night.  Enjoyed a
late dinner, another episode of West Wing (small TV had RCA ports), and look forward to the valley view in
the morning. 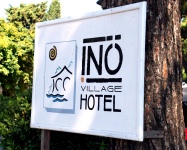 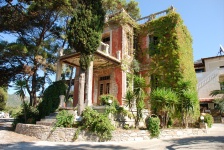 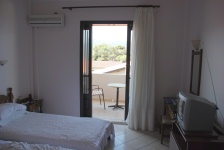 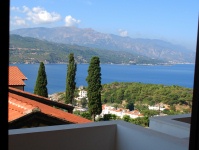 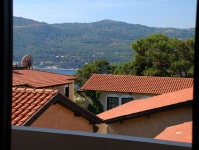