Day 10 - September 20 - Crete to Samos
Fred Flintstone would be happy.  One of the key building materials in Greece is bountiful concrete.  The Plakias Bay
hotel used concrete for the bed frame, corner desk, suitcase stand, and the entire balcony.  It really does work
and should be low maintenance.  Bathroom was limestone covering the floor, walls, and mirror ledge.
Interestingly, the bathroom is the shower room, too.  There is no shower stall or curtain, just a 24" square by
1" deep shower indentation in one corner with a drain.  Another drain in the center of the bathroom handles
spray overage.  It just becomes a skill to use the hand spray.  Guess one could shower, shave, brush teeth,
and other functions at the same time.
Started the day with a run along the Bay - smelling all the bakeries at high production and watching each
shop and restaurant washing their entrance ways.  An the end of the run, a quick splash into the Bay is the
ultimate cool down.
Time for breakfast, quick packing of the backpacks, and onto the airport.  Simply leave the local company
rental car in the parking lot - gas gauge at the same mark as picked up - and lock the keys in the car under
the floor mat.  (Guess a thief would never look there)
Check in and security was easy - no need to take shoes off here.  Like most smaller airports, there is no
assigned gate until the plane arrives.  So, watching the monitor takes on a new diligence.  Watched one
flight being loaded - the size and amount of luggage for the majority of families is enormous.  Most are
visiting for several weeks and seem to bring everything from home.  Works out well for our carry on
since the overhead bins are not used much.  Departure flight was late which would come back to create
a challenge.
Connecting in Athens to Samos will be avoided in the future - land of endless queues.  Since we arrived
late, our Samos flight was leaving in a few minutes.  Earlier,  the Crete airport could not print our connecting
passes and since preprinted boarding passes was not an option, we were sent to the main check in area.  After
working with the gate agent, gate supervisor, and customer service representative, we were rebooked from
our original Aegean flight Olympic arilines.  So, from small jet to prop plane.  All the island domestic
flights are only 35-45 minutes, so, just glad to be flying out and not airport hotel hunt for the night.
All the small regional flights are a bus trip to the airfield.  So, no dry jet way and standing in a misting rain
cold front while each non-hurry person works their way up the small steps.  This is not a "step inside
your row to allow others to pass" society.  Our backpacks would not fit in the small overhead bins - used
for a pair of gloves maybe - and a super nice flight attendant allowed us to use our row for just the backpacks
while we moved to bulkhead seats.
Arrived in Samos as the last flight of the day.  Watched the rental counters close one by one - Our original
flight landed three hours earlier and the rental car representative had come and gone.  Another agent called
for us and we received our car with a little Greek friendly lecture about how the representative waited at the
first flight.  Wasn't concern since this seemed to be an often event.
Now came the real adventure - Raining now, dark, unknown island, and no real directions to the hotel.
Started out with expression "It's dark and we're wearing sunglasses" (from Blues Brothers fame).  Knew
approximate location with visual of the hotel and proceeded to the general area.  After a couple hours
of process of elimination and asking for directions in a nearby town, decided on one remaining high
grade driveway with no signs.  Arrived to the top of the single car width driveway - should say ascended
to the top.  A rather frazzled broken English speaking German lady said she was completing full and this
not the correct place.
Upon the return to the base, a group was exiting a taxi - since it was in the middle of the road, assumed
it may be guests of this hillside hotel.   We were correct - they showed the same hotel name on a
reference document.  So, parked the car along the main road and lumbered up the hill with the backpacks
returning to the frazzled German lady.  She was in the process of departing and seemed annoyed that she
had additional guests - showed her the email confirmation from the hotel and did not impact her view of
"every room is full and we only contact with travel companies now".   Decided to cut our losses and get
out of the cool rain.
Drove to the main city - Samos Town.  Beautiful town along a bay and stopped at the Samos Hotel - a
4 star listing on their doorway.  Only two remaining rooms and was nicely upgraded to a Bay view balcony
with the large scale ferries just meters away.  Parking is a hunt and find scenario; however, felt like
Seinfeld's George Constansa when a curb side space opened up in front of the hotel.  Late dinner was
at an outdoor cafe next door - more Greek salad spicy meatballs while the large screen TV showed
regional soccer matches.
Time to settled in at the hotel and look forward to seeing Samos in the light of day. 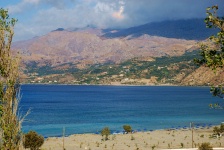 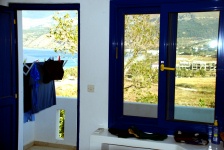