Day 03 - September 13 - Mykonos to Santorini
Morning poolside breakfast at the Hotel Paradison was the pleasant treat - covering the needs for
Continent Europeans (fresh meat and cheese slices) to British (tomatoes and hot small wieners).
Accompanying the buffet were the fresh bread and local jams.
At the suggestion of the hotel staff, we followed the trail of walkers to the small beach of St. Stephalous.
Only a 8 minute walk that requires a careful eye on oncoming traffic - sidewalks are not a well budgeted item,
we came over the hill to a very nice small bay.   One of the walkers was a barefoot determined German girl.
Seems most of the visitors are German - so if you need to practice your German language skills, come to
the Greek islands.
Waters along the Aegean Sea are a continuation of the clear and refreshing Mediterranean Sea - Just
wade out for several meters and your toes are still easily seen.
Time for the late check out and a last taxi ride (5 Euros from Tourlos) to Mykonos Town.  Even though
ferry tickets can be conveniently purchased on-line, confirmation receipts have to be exchanged for an
actual ticket.  Picked up the final two legs of ferry tickets from one of many ticket offices.
After yet another wonderful meal port side, it was time to board the high speed ferry for Santorini.
Arrived at the debarkation line and it was massively full - heat, lines, and a very late ferry was a talking
point for many.  We discovered years ago that staying in a queue is just a suggestion - so, located
another entry and was on board in no time.
Hellenic Seaways Flying Cat 4 was a large dual hull shaped ferry with coach below and business
class above - either was fine; however, business class had above seat storage like an airliner.
'Smooth sailing' would be term for the ride - easy and enjoyable with onboard cafe kiosk.
Arriving to couple of ports was a quick turnaround; however, the woman announcer would always
take a deep breath before starting the English translation.  One note concerning the Greek language,
you hear it from time to time; however, English is so very widespread that it would have to be an
off-the-beaten-path island with an older generation person to be a communication challenge.
"Pictures doesn't do it justice" would be the phrase for arriving at Santorini.  A ferry, or cruise ship,
is dwarfed by the sheer side walls of the Santorini caldron.  Imagine if Crater Lake National Park had
a side entrance and was placed in the middle of a sea - that would be the closest example.
Perched on the ridges is the real meaning of picturesque - whitewashed towns that almost defy
gravity.  Below the edge is layer after layer of volcano rock colors - reds, blacks, browns, whites,
and blends between.  Port arrival is always followed with the "Do you have a room" barkers.  In this
case, car was another major "Do you have" question.
Picked up the non Autobahn tested car Daewoo Matiz.  Really think my childhood go-kart had larger
tires; however, the narrowness of the car is very much appreciated as the drive up the side wall and
into the various small villages started.  Very few options on the car - no power locks or windows, with
the one exception: power full length vinyl roof.  So, that's what the moniker "topless" means on the
back hatch - not a requirement but a vehicle feature.
Since the ferry arrived late, the dusk was setting in and driving in low level or dark conditions
on a Greek island is not efficient as one would like.  So, it is a island and all roads will eventually
end at a beach or cliff; thus, process of elimination was used to locate the hotel.  Knowing the hotel
picture was a benefit if you can see it.  Turns out that electrical power is somewhat of a challenge
in the islands - rolling black outs or humidity in the lines.
After tracking the not-so-friendly road signs and a couple of calls to the hotel, we arrived to the
dark void.  What we could see - including the three level pool and vista in both directions - would
be appreciated in the morning.  Seems that a few rooms, including our reservation, had power
since it was on "another grid".  Didn't really make sense; however, it was another "just roll with it"
moment.
A recommended restaurant was just down, or up the hill, from the hotel.  Selection tonight included
cooked cheese stuffed squid and a fresh "small Santorini tomatoes" salad.  A black do-rag dressed
waiter (Think lead guitarists for the E-Street Band) had a slight comical sense.  As always, there were
a German populace enjoying dinner and this time, providing language lessons for the waiter.  He did
his best and was comically cordial.  Restaurant procedures are very relaxed - after quick service, a
waiter has to be flagged for additional items for the bill.   Far from being neglectful, they will service
immediately if needed - enjoy the table all night and no bothersome "What else can I get'cha?".
Even though the flat panel TV has 9 channels, one can only handle portions of the BBC news,  Their
news is always preferred due to global approach and less show anchors; however, it's not for
evening entertainment - so, Season 4 of 'The West Wing' for the laptop was connected to the TV. 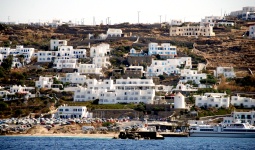 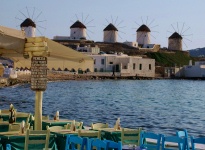 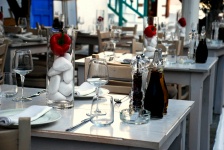 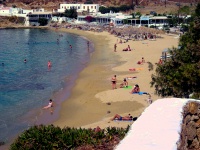 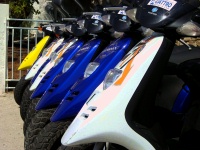 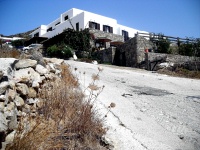 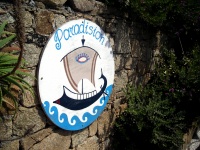 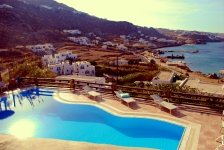 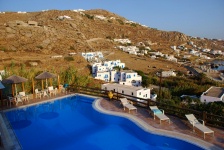 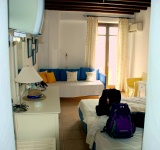 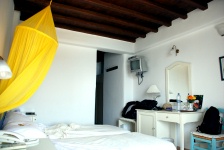 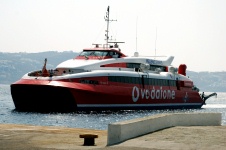 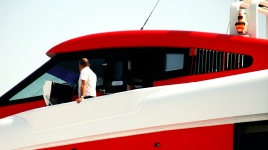 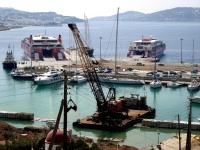 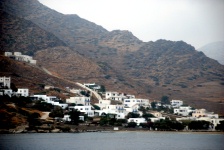