Day 07 - September 17 - Crete
White knuckle exploration driving day - Rough, unpaved, mountain hugging, and narrow roads leading to
various beach coves and mountain villages.  Journey started Eastward to next series of coves - First stop
was the Damnoni beach.  Almost all the coves were dead end drives - only connection between the series
of beach coves were hiking paths.  This beach, along with the majority, has Tavernas (cafes) with outdoor
covered tables allowing for escape from the sun.
A small pocket of a cove was within a short hike over the bellowing rock formations.  This unnamed, or
unmarked, beach seemed to be quite frequented - German visitors at their most relaxed stage.
Amoudhi Beach was accessed by a narrow road, or oversized goat path.  A Taverna was available;
however, part of the building was a work in progress.  This seems to be true for several sites in the
Greek isles - somewhat a pay-as-you-go process.  Owner may have a few walls up this year and
a roof in a few years.  Quite a few skeleton buildings around the islands.
Last stop was Preveli Beach - a route that requires focus on the apex of every curve to determine
if two vehicles will vie for a space for one.  As we descended from the mountain road to beach level,
recent wildfire results could be seen in the charred lands within the gorge.  Green growth was appearing
on the fringe of most trees.  Other features of the rocky road included a cobbled stone Venetian bridge
from the 1800s and heavily mature olive groves.
Previli is unique with a natural river flowing out from a gorge into the sea.  Ice cold water meanders
through a palm forest and river reed borders before taking a right then left into the sea.  Paddle boats
could be rented for a mini jungle cruise of sorts.  After a short nap under one of many trees, it was
time to enjoy a late lunch in an old vine roofed Taverna.  Lunch was rabbit and potatoes cooked by
the host's mother.  Service has been delightful and sincere.
Road back to Plakias was via the mountain road through Sellia and Mirthios - both with overlooks
of the valley.  Discovered a "side route" from Sellia down to Plakias via paved and unpaved segments.
Wasn't sure if road or very long private driveway until the road ended in the pedestrian area of
Plakias.
Ended the day with a hike along the Bay ridge to a series of WW II caves used to access strategic
gun emplacements - only memories now of the Battle of Crete.  Another outstanding sunset and
moonrise finished the day.
Dinner was Cafe Medousa - a block off the main street.  Driveway and vine covered portico was floored in
segments of marble and granite - just ingredients from the local mountains.  Inlaid name "Medousa" in the
driveway was quite the identifier.  Surrounding the portico perimeter was dark pink honeysuckle plants -
which was noticeable when a breeze started.  Again, like almost every restaurant visited, the youngest
spoke the best English and hosted, the next generation up served and monitored, and just like the infamous
stereotype, "Mama" did the cooking.  Results were always outstanding and total cost for two were always
under 20 Euros.
A few other old Greek pictures were still very true - men used worry, or rosary, beads and families set around
the small villages - men on one side and women on the other.  Classic beards and moustaches were
quintessential Cretan style.  Main roads through the smaller villages were only one car width and zig zag
around homes, churches, sheep, dogs, chickens, and naturally people. 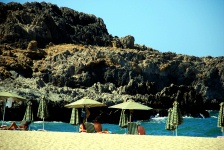 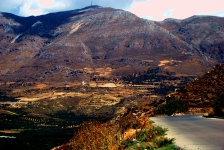 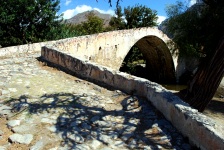 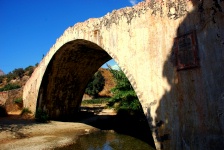 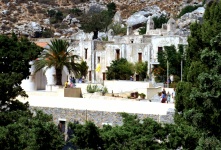 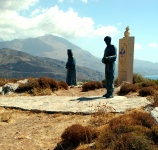 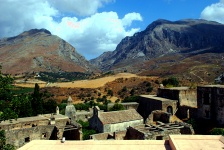 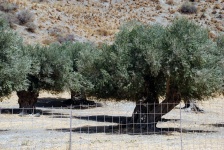 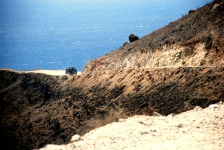 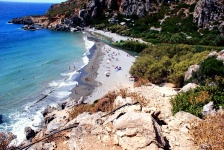 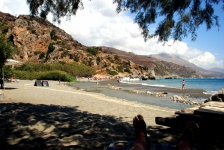 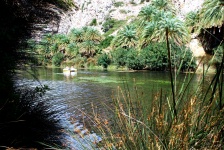 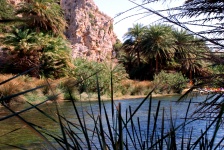 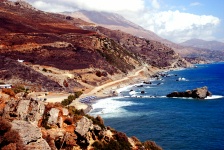 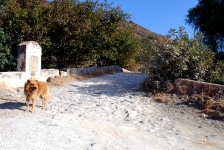 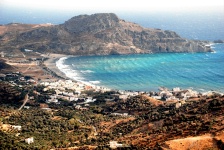 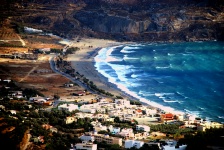 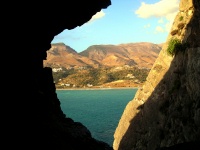 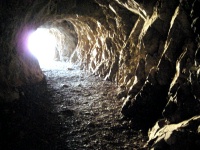 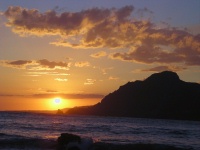