Day 05 - September 15 - Crete
Car, Boat, and Sidewalk day.  Started out with breakfast at the Apanamo Hotel - dramatic views of both the
inside caldron and exterior coastline.  With the usual meat and cheese slices was the fresh thick yogurt with
honey and cherry preserves.  The owner had already been fishing in the early morning and was relaxing
indoors from the out of norm humidity.
On the rear of the property were the familiar small farm sounds - rooster crowing at no particular time,
bells from goats' necks, and the megaphone from the traveling merchant.  In rural areas, the store comes
to the countryside.  Think 'ice cream man' with house rugs instead - just listen for his loud speaker on the
vehicle roof.  Tomorrow may have shoes.
All of the hotels and most buildings have a straight forward construction - all concrete based.  Start with a
concrete foundation, concrete reinforced legs on the corner and mid section, and a full flat or curved concrete
roof.  The wall spaces are filled in with concrete block and windows or doors.  Result is a very think wall that
is almost soundproof and cool inside.  Much like building an exterior cave.
Exteriors are very much like a stucco coating with reflecting light colors such as white, light browns, or
cream colors.  The accent piece is always the door and potentially matching shutters.  Colors for the doors
are the rainbow of selection on framed wood.   Windows are typical Euro function - turn the handle up to tilt the
window in for ventilation and turn the handle 90 degrees for full opening.  Many of the window frames are
coordinating door colors.
The hotel's 3 layers of pools had 'million dollar views' for just 80 Euros a night - outstanding accommodation values
on almost all the islands.  Bougainvillea reigns supreme for landscape - a abundant flowering colorful vine that
does well on the rocky soil and limited water.  Very helpful since it hasn't rain since April.  Rain season starts next
month and many hotels and ferry either end for season or limit their schedule.
Santorini has a variety of  transport - cars, buses, quad runners, scooters, taxis, and hotel shuttles are vying
for a narrow lane of asphalt.  Public transport buses are not your local type buses - they are easily confused for
deluxe tour buses with interior curtains and air conditioning.  Routes are divided into 5 areas - including one
'purple' route for public ferry between the ends of the island.  Inclines and hairpin turns from the high caldron
rim to the water level dock is a gentleman's version of "playing chicken' since the buses and commercial vehicles
need all the road for the turns.  From the dock, the road looks a series of "Z-Zorro" marks in the side of the
multi color stone wall face.
Lunch in Fera was the most touristic since the fleet of cruise lines send their tenders to the old dock with
cable car, donkey ride, or endless steps up to the rim.  Many of the shops and restaurants line the rim and
as always, postcard vistas around each corner. A later drive to the top of central mountain used for military
radar allowed for full island views.  Since the rental car stated with 5/8 full, we attempted to use our overage
on last minute sight seeing down to another resort area named Kamari - nice black beach with tree lined
sidewalk and modest apartments or hotels.
Time for Crete.  Parked the rental car in the first available spot and locked the key inside.  Attempted an
Internet cafe to upload the website pages and pictures - not sure if successful since time ran out on the
2 Euros per 15 minutes.  Also, there was a vain attempt to think the ferry would be on time.
Hellenic Seaways continued to struggle with their passenger only ferry schedule - 1.5 hours late.  So, the
departure ended up being a sunset cruise, too.  Every seat in coach and business class was used. About
30 minutes into the 2 hour ride, the setting sun was on the right side and the raising full moon was on the
left - a contrast of glowing yellow with bright white.
n                                                At the Iraklion, Crete, port was our waiting car rental representative - an older gentleman with broken
English - with his clipboard of printed names.  "The men set in the car to do business" was his approach
to handle the paperwork with handheld charge station.  Leaving in the dark is not the best approach
since the city is fair sized and bustling with cars and nightlife.  Once the National Highway was located,
only 70 kilometers to Rethymnon.  Thankfully, the highway had some limited on/off ramps and had been
recently paved.  So, night driving along the costal mountains was somewhat quick.
Next drive was off the National Highway to secondary roads and through small villages to the destination
of Plakias.  It may have been easier to see the reflective directional signs at night - usually during the day
driving, one has a tendency to fly by.  Within the last 10 kilometers of the drive, the road was carved into
a mountain gorge.  Full moonlight provided a glimpse of the surrounding beauty.
Arrived in town at 11:30 PM and located the hotel at the end of town.  Hotel hostess was a very gracious lady
who understood very well the late ferry life.  After checking in and undergoing some key locking learning
curve, we ventured out into town for late dinner.  Several of the supermarkets and bakeries are open
to midnight and other restaurants to 3:00 AM.  Purchased a few pastry sandwiches and retired for the
night. 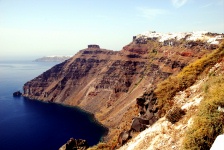 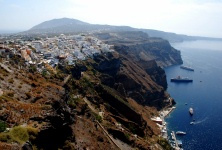 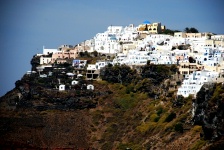 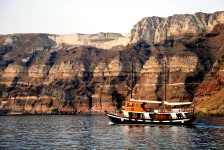 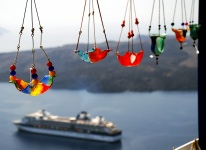 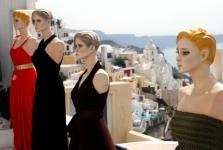 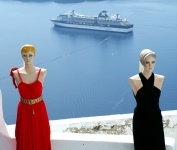 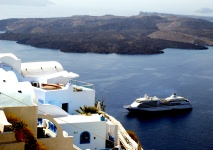 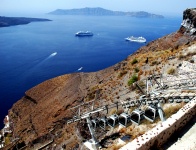 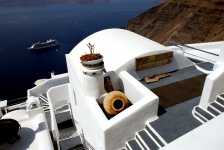 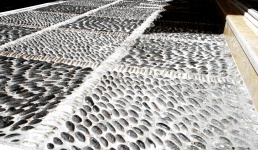 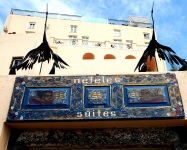 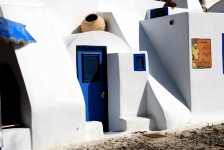 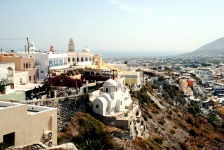 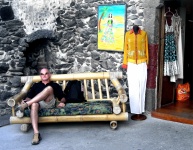 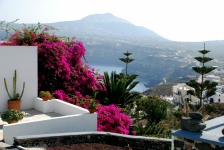 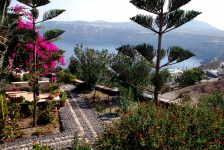 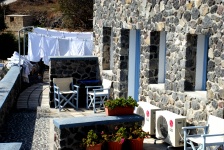 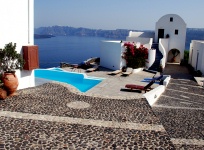 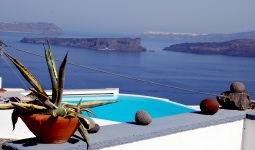 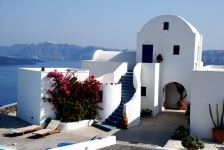 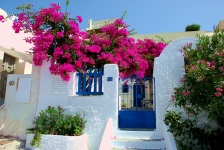