Day 08 - September 18 - Crete
Sun and rain day - Sun on the beach until mid afternoon when a few light rain clouds came over the mountains.
After a short misting, the sun was out again; however, time for an afternoon drive.
Other towns West of Plakias were set at the foot of impressive gorges - Crete is one large boulder in the
shape of mountains, gorges, and fields of stones.  Most of the large cities, main resorts, and commerce
in on the North side.  So, the lower area is fishing villages coming to life with mostly German and British
tourists.  'Americano' is not very common, or seen, in the hotel or the town.  States side visitors are mostly
from cruise ships.
Dinner included watching the sunset set behind "the rocks" - an area on the West side of Plakias town
that has several large black boulder 'tossed' into the sea, as if someone played the game marbles with
oversized stones.  Thus, the name of the bar next door was "On The Rocks".  The meal was incredible
as others and included the customary fresh fruit (apples and nectarines tonight) with two shots of ouzo.
Watched the moonrise from the hotel balcony - at the same time, laundry was drying on the built in
scissor frame clothesline.  Nice night to sleep with the balcony door and windows open with the
steady waves crashing into shore. 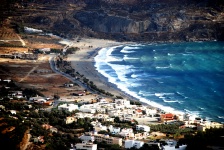 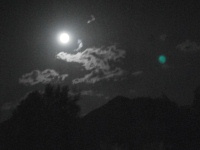 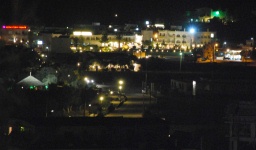