Welcome to Albuquerque!  The surrounding landscape appeared as New Mexico when landing in Athens.
Low level light brown mountains covered with scrub plants were very familiar; however, the olive trees did
create a contrast.  Delta flight 132 did not have their "A Game" on - forgot the safety film and review, two
hours late start due to entertainment system malfunctions, and thankfully, we didn't upgrade on this one
segment due to non reclining chairs and blank video system.  Landed an hour late and was ready to
take the backpacks and fly out the exits.
The Athens airport is simple and refurbished thanks to the past Olympics.  Logistically, the new light rail system
was invaluable to avoid the traffic.  Street patterns can best be described as planning by using 'pick up sticks'
game and pave where they land.  Standard materials in the Metro light rail stations is marble and glazed tile -
always beautiful and long lasting.
Blue skies and slight warm weather awaited the day of adventure.  Greece is a historical jewel on the Balkan
peninsula holding thousands of years of history.   Now, the city of Athens itself is not as old - mostly built in the
post 1940s with simple concrete structure buildings and more reflective of old Eastern Europe instead of
classical design.  Endless colors of gray and light brown creates a non impressive metropolitan devoid of color.
In the heart of Athens is the very well known and very well photographed Acropolis - a hill area with the
Parthenon as the focal point.  The ancient temple was started in 447 BC and is encompassed  with Doric columns
standing at attention.  Additional column parts, wall parts, and unknown parts are lined up around most structures.
Seems the Parthenon will forever be associated with scaffolds - always being restored or repaired.  A current major
project is to replace restorations from the late 1800s.  So, new and old share space on the columns and roof lines.
Looks like using 'play-doh' with two colors - light and dark.   Yet, in spite of construction, rail lines for parts, and
hordes of tourists, it is the premier icon in the World.  It falls into those categories of "has to be seen".
After viewing other ancient sites, including the Temple of Athena Nike (not to be confused with Athena Adidas
or Athena Reebok) and amphitheatres (think Yanni's voice still echoes), it was time to head to the coast for
the ferry ride to Mykonos.
One noted feature of Greece is lower travel costs - only 80 cents for the Metro, 2.2 Euros for the hour long
bus ride to the coast, 50 cents per bottle of water, and most importantly, 1.5 Euros for a real Gyro sandwich.
Arriving to the East coast port of Rafina was very easy - the port is very compact and fully functional.  One
challenge was that Cyclades Fast Ferries company did not have an operational ship today.  So, they moved us
to another line and refunded 70 cents difference - nicely handled from friendly counter people that were dressed
underneath with swimsuits (understandable with a large beach across the street).
Ferry rides between the islands is always a favorite decompression technique.  Lying down on top side benches
and enjoying the constant breeze is pure relaxation.  Halfway through the 4.5 hour journey, the sun began to
set on the horizon.   Glowing sun was crosshatched with air traffic vapor trails - reflecting the same golden
reds streaks.   A ferry captain is a no nonsense driver when arriving at small island towns - able to dock on
the fly and return to schedule quickly. 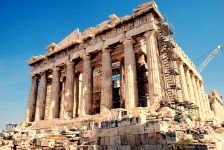 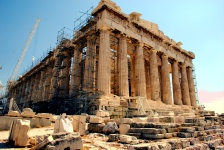 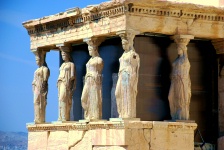 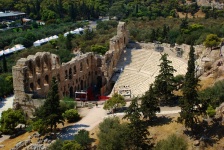 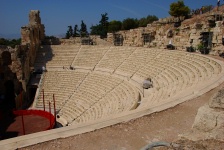 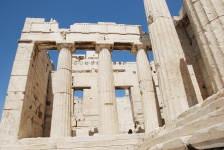 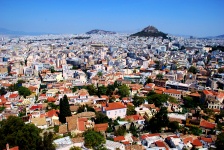 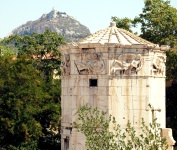 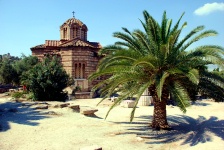 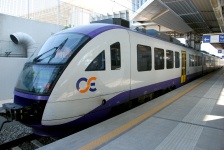 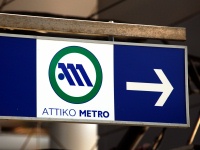 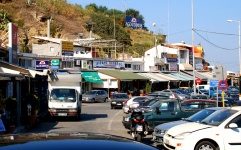 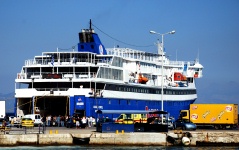 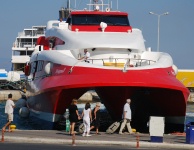 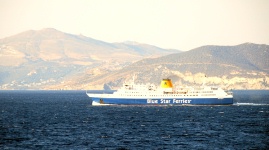 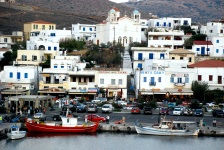 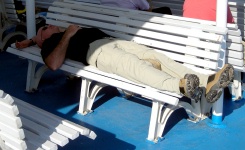 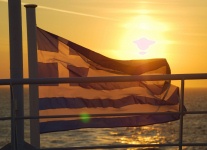 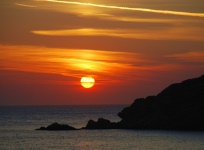