New Zealand 2007
Day Eighteen Bleinheim March 31
Travel day from Christchurch to Bleinheim presented several vistas of the Pacific coast.
Road conditions were clear and the four hour journey had limited curves and foothill
mountains.
Lunch choice was the peninsula town of Kaikoura.  The area is known for it's seafood and
several restaurants and small roadside kiosks featured crayfish.  Once we saw the prices for
a whole and half crayfish, we knew Kiwi terminology was different.  Seems that crayfish are
not the small crawfish, but, the large lobsters.  Kaikoura was the Maine of New Zealand.
After viewing the Pacific and seals from the Kaikoura point, we continued on the Pacific
Route 1.  A couple of stops along the way were interesting - Ferrari car rally parked at
a winery and then a saltworks factory.  The saltworks uses large basins and outgoing  Pacific
tide to capture sea salt.  Results were large mounds of salt to be processed.
Our arrival town of Bleinhiem is being impacted by the growing wine industry.  New
streetscape and artistic shops enhance the town.  We learned another driving difference -
on the two lane roads, right turning - across traffic - has the right of way compared to cars
turning left on their own side.  Looks like it helps keep cars from blocking traffic - that's our
guess. 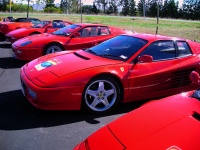 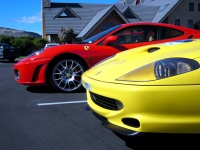 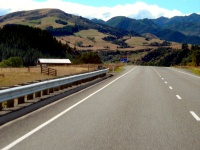 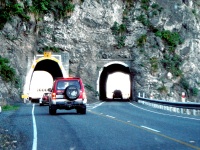 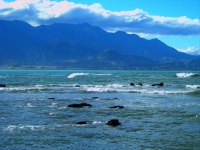 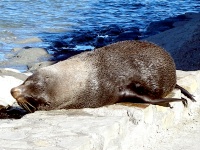 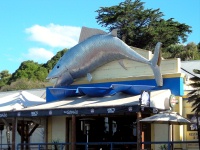 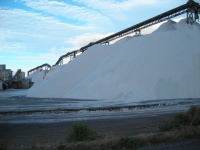