New Zealand 2007
Day Fourteen Te Ananu March 27
Today was a main concern - could the track be completed by 2:00 pm since the boat
pickup and next bus shuttle schedules were set?  The final leg was just short of the length
of a normal half marathon.  So, whatever pains were lingering from yesterday's
mountain ascend and descend would have to be ignored.
Most of the final portion was still descending; however, the path was mostly small
boulders.  We followed the ranger's time schedule and was able to leave very early
and enjoy the final few miles.
Hiking from the Dumpling Hut encountered extremely picturesque waterfalls,  Two falls
marked the 1/3 and 2/3 points of the final hike.  To hear their thundering sounds in
advance was very encouraging.
We arrived to the final hut named Sandfly point.  The name didn't require much thinking
and those without bug repellent could quickly explain the name choice.  All from the
initial group arrived in time.
At the end of the track, a narrow boat picks up all the hikers and the 20 minute ride
goes across the Milford Sound - again, stunning views of the fjord and yet another
large waterfall.
A timed bus schedule shuttled us back within 2 hours to our starting point in Te Ananu.
The trip included a rather tight road tunnel.  Upon arrival, no backpacker instant grub
tonight - dinner selected was the Moose Restaurant with their specialty of venison
tenderloin.  A couple of dark ale beers accompanied the dinner course.  However, prior
to dinner was the much appreciated (for us and anyone near us) hot showers and spa
tub at the hotel.
A very sound sleep is on the schedule for tonight and off to Queenstown and the Glacier
country tomorrow. 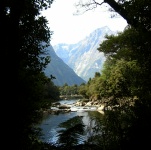 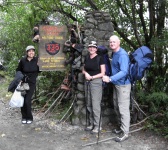 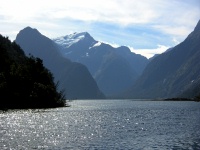 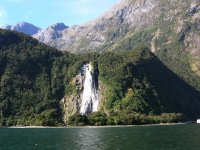 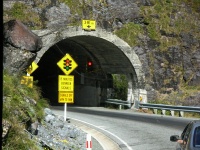 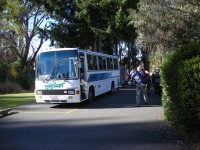 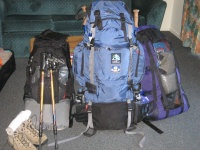