New Zealand 2007
Day Thirteen Milford Track - Dumpling Hut March 26
Weather changed to drizzle in the morning - "lovely" compared to rain mentioned by another
hiker.  Waiting until a 10:00 am start allowed us to miss any rain; however, it did create
a time challenge to ascend the mountain.
McKinnon pass is about 3,400 ft elevation and is grueling for those accustomed to sea level.
However, each level of ascend encountered different birds and flora backgrounds.  About
2 miles from the pass, the weather cleared for outstanding vistas.  Seems the "weather rock"
was correct.
At the pass to the next valley, the Pass Hut was a needed shelter from the cold and strong
winds.  The hut included a propane burner, so, instant chicken soup was lunch.  Interestingly,
the remote toilet has a clear window on the door - allowing for constant viewing of the valley
below.
Living on on the perimeter of the Pass Hut were large Kea alpine parrots.  The birds are named
for their call - "Kee' ah".  Also, they have a reputation for acquiring items - especially hiking boots.
So, at any hut, boots are tied to each other and secured to wall racks.
The descending of the mountain pass was obviously much easier - except for other hikers with
not so great knees.  Large scale waterfalls and multiple staircases followed the trail.  Many
hikers hobbled in to Dumpling Hut. 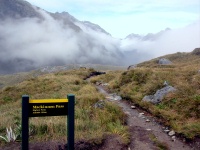 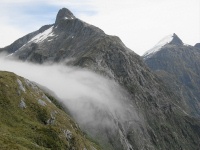 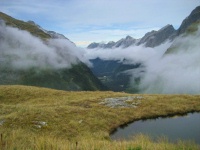 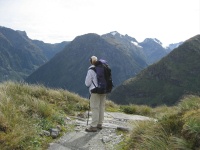 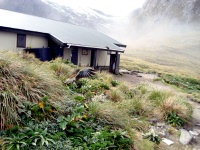 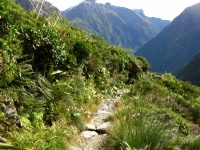 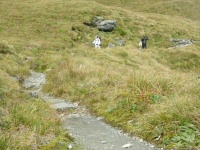 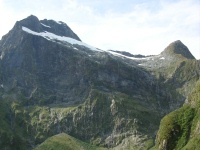 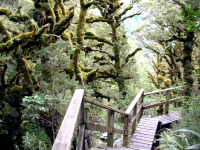 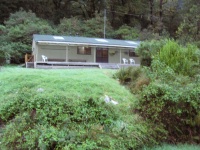 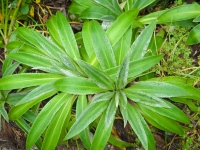 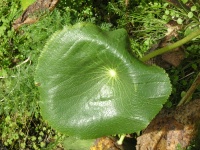 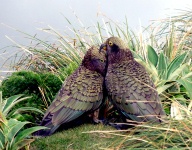