New Zealand 2007
Day Eleven Milford Track - Clinton Hut March 24
A  hike of several years' planning starts today.  The Milford Track is a 33 mile trail that has been
described as the "World's Finest Hike".  It will take four days and three nights to transverse the
constant changes in scenery - from rain forest to alpine meadows to glacier mountain passes to
an endless array of waterfalls.
Categorized as a "Great Walk" by the Department of Conservation (DOC - States' NPS equivalent),
the track is highly regulated and controlled.  No primitive camping is allowed.  Instead, communal
huts are provided to control impact to the surroundings.  Huts are rustic and toilets/washrooms
are combined (Think unisex restrooms from the Allie McBeal television program).  One designated
hut will have a section of propane burners - so, the aromas of chili, pasta, or anything made with
boiled water will fill the room.  Accommodations include 2 tier bunkrooms with covered mattresses.
Just roll out a sleeping bag on the bunk and you're set.  (Ear plugs were very helpful).
The first day included a two hour boat ride across Te Anau Lake.  A twin hull ferry boat was
accompanied by bright sunshine - great start with excellent visibility of surrounding Alp mountains.
Once docked, all the hikers (trampers in New Zealand language) hauled their backpacks off the
boat and the trail officially started.
Part of the controlled impact is only 40 independent hikers per day.  Guided hikes are also
available; however, their huts are located usually an hour or two before or after the independent
hiker huts.  Guided hikes are about 10 fold cost; however, it does include wine and hot showers.
'United Nations' of hikers included visitors from Canada, Japan, Germany, Austria, Australia, USA,
England, and a few from New Zealand itself.  Some were journeying for a year in New Zealand.  One
Japanese couple were hiking all the "Great Walks" in secession.
After a short hike pass golden fields, we started the first of many bridges - this one being a
large suspension, or swing, type across the Clinton river.  Swing bridges are usually
two or three planks wide.  So, the 'bounce' factor is quite high.  Hike for the first day is only
one to two hours - impacted by the constant photo spots.
The ranger at the Clinton Hut provided a nature hike through the adjacent swamp.  He provided
insight as to the first of many birds and plants that we would encounter.  After a couple of the infamous
backpacker freeze dried meals (just add boiling water), it was time for time for "lights out" and
a solid sleep - thinking of tomorrow's 6 hour hike. 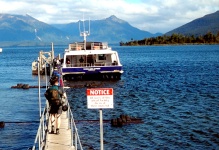 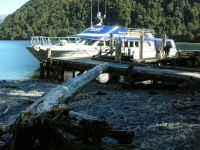 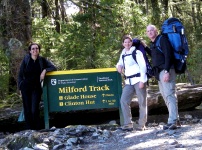 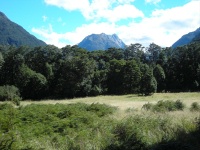 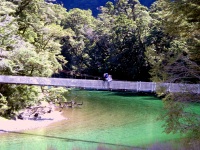 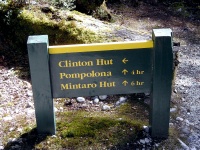 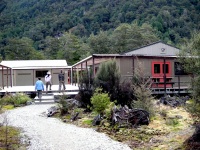 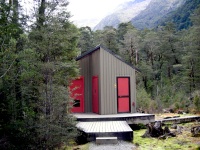 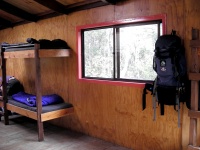 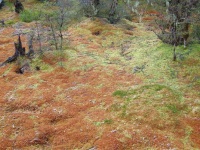 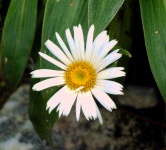 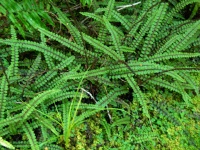